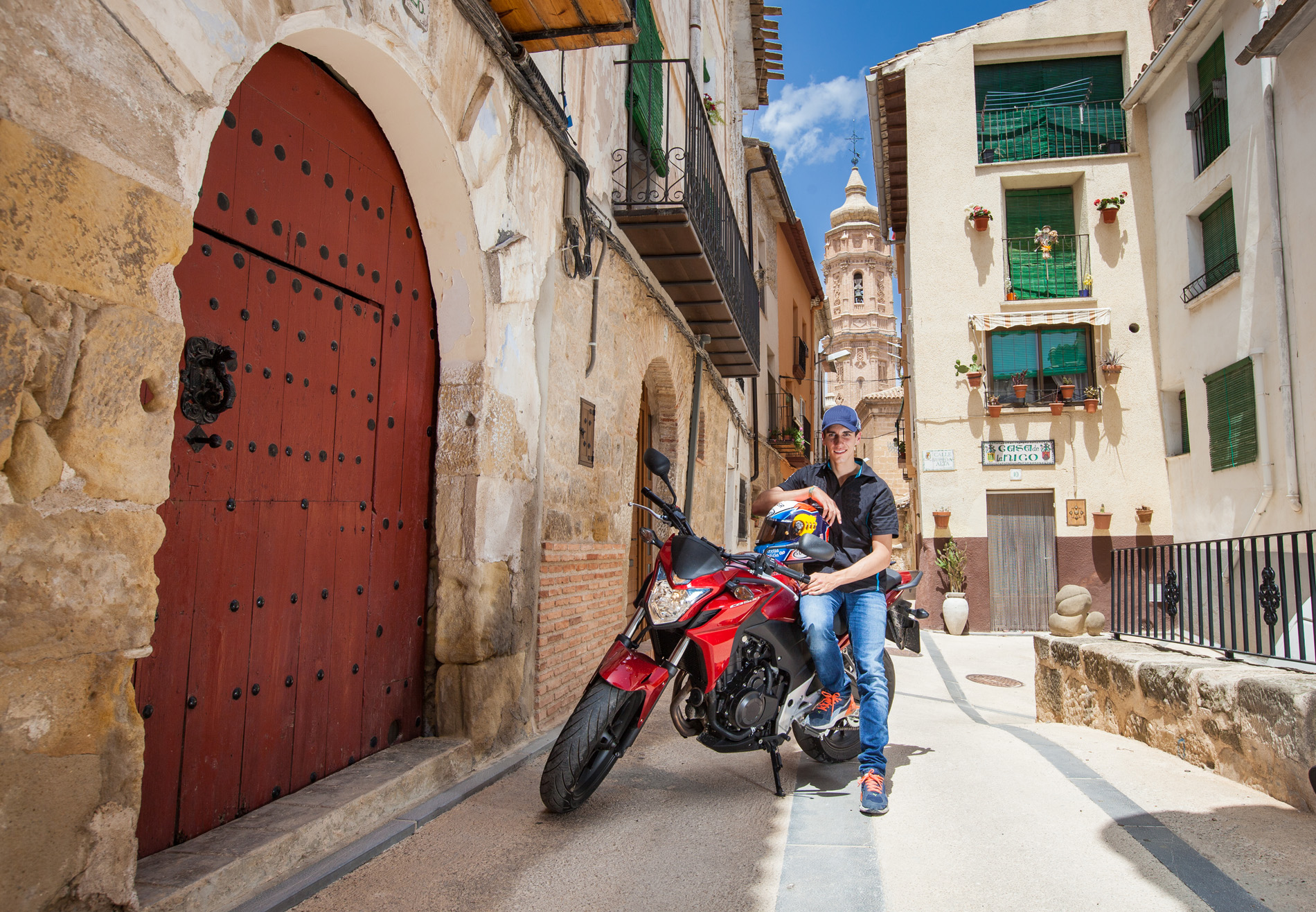 Route of Land and Art

Get to know Lower Aragon, a surprising land filled with tight bends and magnificent landscapes. Discover the cultural heritage of this region through a route that merges land, art and tarmac.

The variety of landscapes found in Lower Aragon are a treat for visitors' eyes. From the plains, with their orchards and olive groves, to the foothills of the Iberian Mountain Range, the landscape is filled with tracks, paths and trails where outdoor activities can be enjoyed on the saddle of a bicycle, on horseback or on foot.

This region offers visitors a highly varied, quality gastronomy, for which the renowned protected appellation of origin Calanda peaches and Bajo Aragón (Lower Aragon) olive oil are among the best examples.

The tradition of festivals in the Lower Aragon region speaks of ancestral pagan feasts and rites that were gradually Christianised over time to become what we know them as today. Rites associated with fire, water and processions, and the famous Lower Aragon Holy Week celebrations give this land its strong personality. The different historical recreations that are performed in the towns and villages of the region attract more and more visitors and allow them to relive the history of the early days of their history through the Middle Ages and the Golden Age of Spanish history of the 16th and 17th centuries.

Different types of accommodation including rural guest houses and lodges, make a stay in the area more pleasant and allow you to escape the hustle and bustle of the big city, while you enjoy the hospitality of this region.

The cultural offering of the region is embodied in a multitude of events, festivals and concerts held every year. The extensive  choiceof museums and exhibitions will delight visitors eager to learn.

The long automotive tradition of the region is reflected in Motorland, the perfect destination for motorsport lovers. This multi-purpose complex is backed by leading names in Formula One racing such as driver Pedro Martínez de la Rosa and the designs of prestigious architects like Sir Norman Foster.

This route is approximately 170 km in length.

The route begins in Alcañiz, capital of the Lower Aragon region, and leads to Castelserás along a 9.5-km stretch of the A-1409.

The city lies on a meander of the River Guadalope that “embraces” the hill of Pui-Pinos. Its name is Arabic in origin, and refers to a cañizo or cane, which forms part of its coat of arms. The city's name is also accompanied by the honorific titles of “Loyal”, “Most Loyal” and “Heroic” owing to the bravery shown by it during different conflicts. Read more

The town of Castelserás stands on a hill and Calle Mayor, the main street, forms the boundary of the medieval town. Above the rooftops of the tpwm rises the church of Nuestra Señora de la Natividad... Read more

Without leaving the A-1409, continue for 11.1 km to Torrevelilla. A stroll through Torrevelilla offers visitors a glimpse of good examples of vernacular architecture in its whitewashed buildings and wrought iron balconies... Read more

Take the A-2406 along a 14.8-km stretch of winding road to Calanda, the town made world famous as the birthplace of the amazing film-maker Luis Buñuel. In the streets of Calanda you can see buildings in the Renaissance style, such as the town hall, which features Rococo-style frescoes on a side façade, painted in 1704 and dedicated to the illustrious natives of the town, such as Francisco Cascajares. Read more

On leaving Calanda, take the road to Mas de las Matas, skirting the Calanda Reservoir (A-226 19.9 km). The town of Mas de las Matas is home to buildings of great interest, such as the town hall, dating from the mid-17th century, above the space that housed the old market, built in stone with semicircular arches on the ground floor, and a long balcony running along the upper storey. Also worthy of mention... Read more

After visiting Mas de las Matas, take the A-226 again, and turn right onto the TE-39 after 7.6 km to reach Seno (3.9 km), one of the smallest villages in the region, which is a tranquil place with surprising examples of architecture, such as the recently restored church of Santa Elena... Read more

On leaving Seno, double back along the TE-39 and turn right onto the A-226 where you left it previously, and continue along it to Castellote. Once past this town, keep to the A-226 for 5.1 km just before reaching the Santoles Reservoir. Then turn left towards Jaganta. The outstanding feature of this village in the municipality of Las Parras de Castellote is the wonderfully preserved old olive oil mill, dating from the 17th century.

Continue on the road towards Las Parras de Castellote along the TE-V-8301 for 2.9 km. There is a wealth of cultural heritage in Las Parras, a living testament to the history of the town and its inhabitants. The most outstanding of all its buildings is the church of San Nicolás de Bari, built in masonry in the 17th century. Read more

Take the TE-V-8301 again and continue along a 10-km winding stretch until you arrive in Aguaviva, the gateway to the Lower Aragon region from the neighbouring province of Castellón. A stroll along its streets soon takes visitors to a beautiful square, the Plaza de España, surrounded by arches and divided into two levels connected by a staircase. Read more

After visiting Aguaviva, continue the route along the A-1409 through scenic landscapes until you reach the town of La Ginebrosa. The present-day town dates from the times of the Christian reconquest of the area from the Moors, and has a number of charming spaces. Read more

Continue along the A-1409 for 3.6 km until you reach La Cañada de Verich, a beautiful and peaceful location filled with pleasant surprises, such as the olive oil mill, now a museum, and the cold vault. The square, Plaza España, is laid out over two levels and is the site of several interesting buildings. On one side, the church of San Blas has a number of elements in the Gothic style. There are also a number of monumental edifices, such as the town hall, once associated with the Confraternity of Saint Blaise (1733). Read more

After visiting La Cañada de Verich, it is time to move on to the next destination by following the TE-35 for 5.1 km until you reach La Cerollera. The best way to get to know the streets and inhabitants of La Cerollera is to start at the main square, Plaza de la Constitución, site of the town's most emblematic buildings: the church and town hall. In the vicinity is an old guerilla camp from the time after the Spanish Civil War, now a museum experience. Read more

In order to reach the next destination, you will need to double back along the TE-35. Before reaching La Cañada de Verich, turn right into the A-1409 and continue for 2.7 km, then turn right onto the A-2049 for 3.9 km to reach Belmonte de San José. This is no doubt one of the most beautiful towns in the region. Standing in its streets are gates once built into the 18th-century protective walls, such as the beautiful Soldevilla Gate, which features its original stonework. Outstanding among the town's edifices is the church dedicated to the Holy Saviour, built in stone masonry and ashlar in the 18th century in the Baroque style. Read more

Leave Belmonte behind and continue along the A-2409 until the crossroads, then take the A-1409 for 7 km to return to Torrevelilla, which was passed at the start of the route.

Now continue along the A-1409 and later the A-2408 for 7.8 km until you reach La Codoñera. The town contains interesting architectural works that reflect the its progress. Among these is the church of La Asunción de Nuestra Señora. Construction began in the 13th century and endured through different periods of time. Its final appearance is mainly in the Baroque style, with Solomonic columns flanking the main door, a barrel vault with lunettes, and a large bell tower. Read more

Take the A-2407 for 3.3 km until you reach nearby Torrecilla de Alcañiz, where the town hall is a striking feature of the town. Built in the late 16th century in the Renaissance style, the town hall is a rectangular, three-storey edifice. The three-sided former market on the ground floor is entered through any of four low arches. The windows on the first floor feature an interesting variation in the carved lintels, with the exception of the side window which is flanked by two pilasters and topped by a pediment. The uppermost floor of the building features a gallery with a typical Aragonese-style arcade cut into the wall, and is crowned by broad cantilevered eaves with brackets. Read more

Take the A-1410 for 11.1 km until you reach Valdealgorfa. As you tour the town, you walk amid noble Renaissance-style mansions with arched stone doorways, such as the house of the renowned botanist Pardo Sastrón and that known as Casa Mora. But standing out above all others is the palatial home of the Baron de Andilla, located in the Plaza de Mercado, the popular market square. Built in the late 16th and early 17th centuries, it has a style similar to that of Aragonese Renaissance palaces, with the typical upper gallery styled as a loggia – with low arches between columns – under large cantilevered wooden eaves. Read more