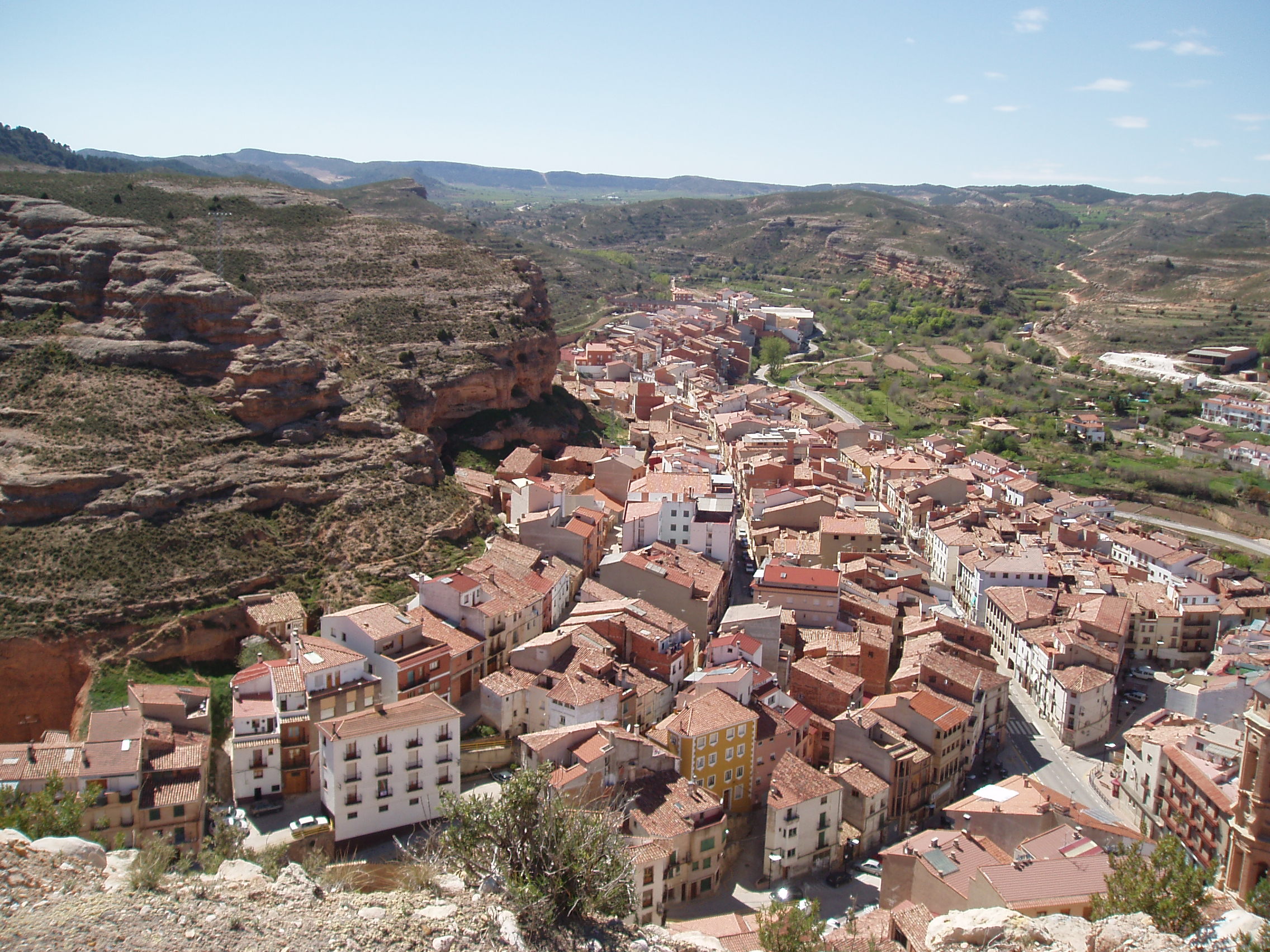 Welcome to Alcorisa, a vibrant and welcoming locality in Lower Aragon, which proudly bears the honorific titles of “Faithful” and “Most Illustrious”, granted to it by the Spanish King, Philip V. The town was originally known as Alkol, derived from the Arabic al kura, meaning “the farmsteads”. The origin of its current name, Alcorisa, is not clear, although it is thought to derive from the Spanish word alcor or hill, a reference to the many hills in the area.

Whatever the case, Alcorisa is located in the midst of fertile land inhabited since time immemorial by different cultures. The earliest evidence of human activity to date can be found at the archaeological sites of Fila de la Muela, El Morenillo and Mas del Hambre. The first permanent settlement discovered to date is the Iberian village found at Cabezo de la Guardía, listed on the Aragonese register of cultural heritage sites in 2001, where fragments of painted pottery and the ruins of Roman baths have been found. This site is now a part of the Route of the Iberians in Lower Aragon, an interesting initiative for archaeological and cultural tourism based on the culture of the Ancient Iberians in the east of Aragon. 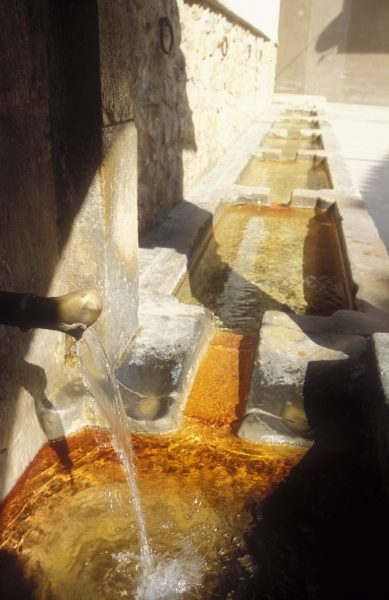 After the Christians reconquered the region from the Moors, Alcorisa was included in the lands donated by King Alfonso II of Aragon in 1179 to the Military Order of Calatrava, and was incorporated into the district of Alcañiz in 1263. The locality gradually grew in population and wealth until, in the late 16th century, it became a thriving town that desired more independence in order to control its own affairs. In 1591 it was granted autonomy by Spanish King Philip III to exercise civil jurisdiction in minor matters, but it would not be until 1605 when, after years of legal battles and appeals, the king granted Alcorisa its long-awaited town charter, which, as specified by royal privilege, envisaged the following:

“ … henceforth the inhabitants of Alcorisa shall be and shall be understood as separated and exempted from the city of Alcañiz and its civil and criminal jurisdiction, with their lands and boundaries.”

This historic event is now commemorated by the the residents of Alcorisa through the celebration of the Festival of the Town of Alcorisa, a mass hisorical recreation that takes place every two years and which gives the town the feel of what it used to be like during Spain's Golden Age.

One of the most striking sights visitors have when they arrive in Alcorisa is that of the abrupt hills that rise from one of the sides of the town, and the silent duel they have maintained over the centuries with the verticality of the bell tower of the parish church. It is this nearby natural environment, filled with beauty and charged with symbolism, which is recommended as the starting point for a tour of Alcorisa, and one that will most likely endure in the memory of visitors to the town.

The walk up via the Monte Calvario (Mount Calvary procession route) combines the beauty of a natural setting cloaked with vegetation and pines that can be enjoyed while advancing along a paved path that takes the form of a Stations of the Cross laid out in the 16th century. Peirons, marker columns with religious images, and chapels appear to visitors, as well as quiet spaces with views over the town and surroundings. Along the way, it is possible to catch sight of wild goats, inhabitants of this place, which have now become part of its appeal. Close to the top of the hill is the chapel of El Santo Sepulcro, one of the symbols of Alcorisa, dating from the 16th century. Visitors are invited to enjoy a moment of serenity before continuing to the top.  Once there, and leaving to one side the 17th-century chapel of San Juan, turn towards the natural vantage point that is the Peña (rock) of San Juan in order to enjoy the magnificent scenery before you, with the domed bell tower of the church rising in the foreground.

Monte Calvario is also the natural setting for the Passion Play, which for almost thirty years has drawn thousands of people to Alcorisa on Good Friday and which has become not only one of the leading drawcards for the Alcorisa Holy Week celebrations, but also for the Drum Route of Lower Aragon. The well-selected natural stages add realism to the play, which combined with the quality and enthusiasm of the actors, leave believers and non-believers alike in awe year after year with each scene. 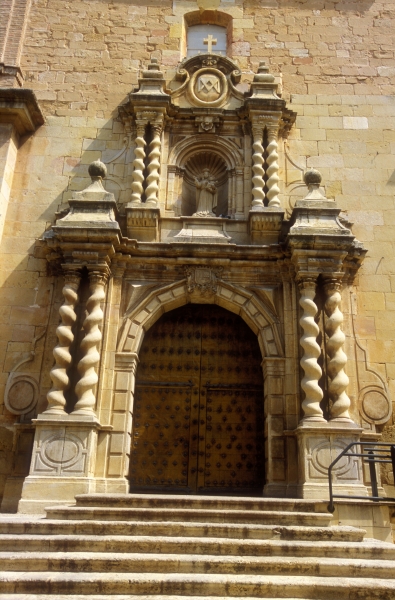 After descending, the visit continues with the obligatory view from the staircase leading to the church of Santa María la Mayor to delight in the beauty of its Baroque façade and monumental  bell tower (18th c.) with its decoration reminiscent of the Mudéjar style. This landmark was listed on the Aragonese register of cultural heritage sites in 2002.

After visiting the complex comprising the refreshing Fountain of the Three Spouts (18th c.) and the public wash house, which is still in use today and where it is possible to see women washing clothes in the style of bygone years, the visit continues through the streets of the historic quarter that retains its medieval layout. Here one finds niches with statues and small niche-chapels honouring the saints that give their names to the streets, and examples of Aragonese vernacular architecture that coexist with shops and charming spaces. Special mention should be given to the Plaza de los Arcos, a square in which a great many historic events have taken place.

The visit to the old town ends with the church of San Sebastián (18th c.) which has been completely restored and now houses the Holy Week Interpretative Centre, the Rural School Museum and the visitors' centre for the Route of the Iberians. 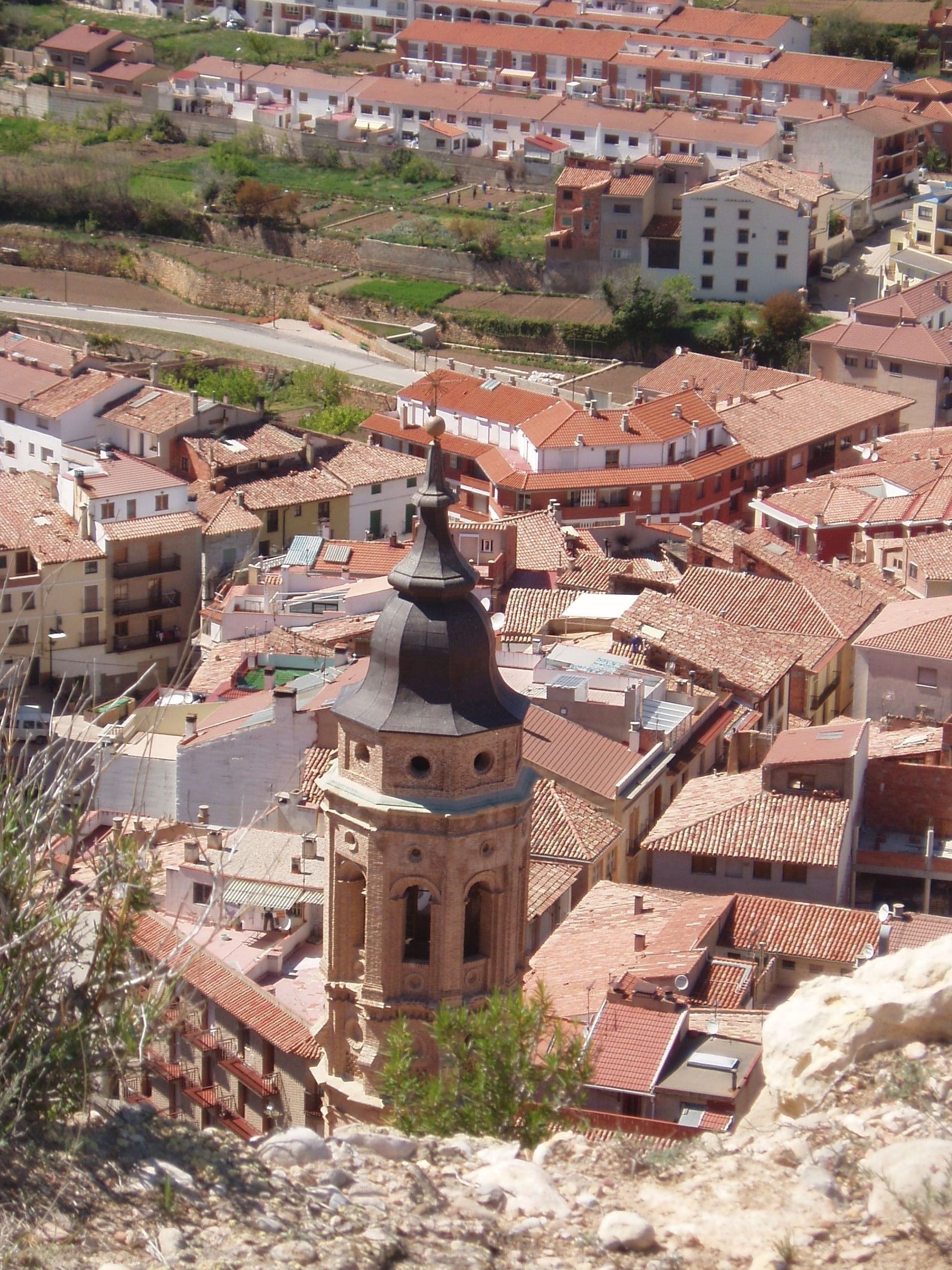 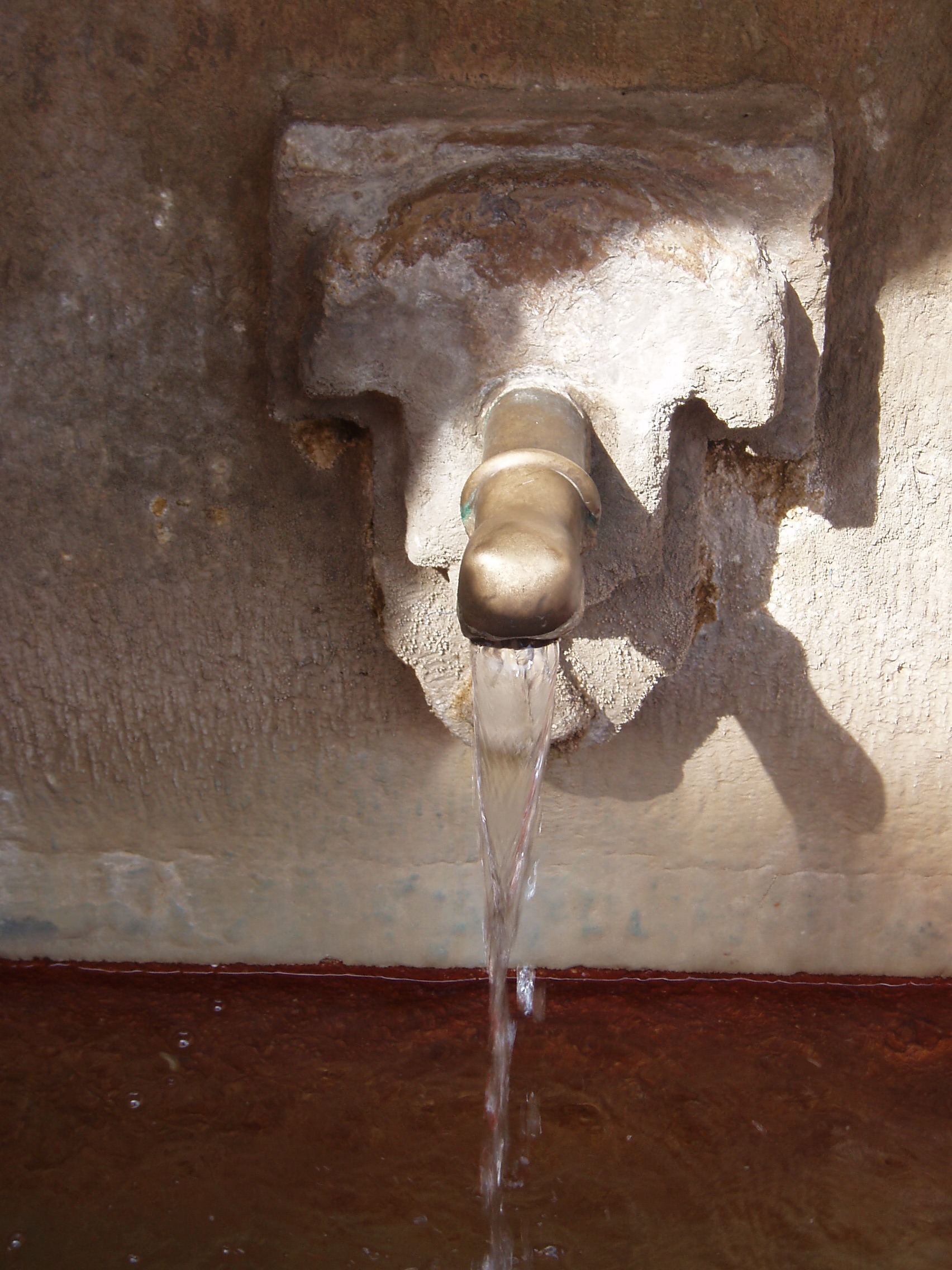 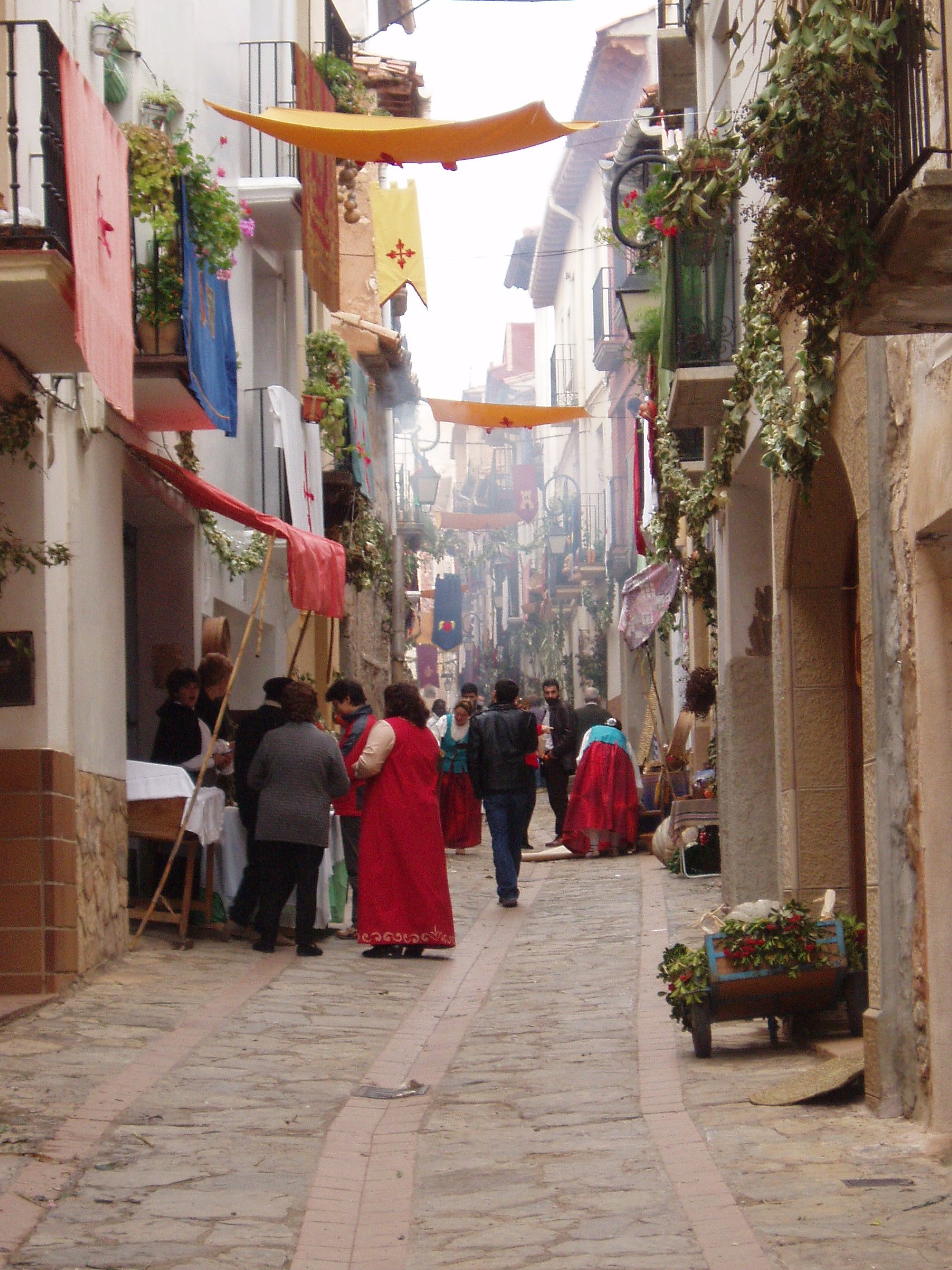 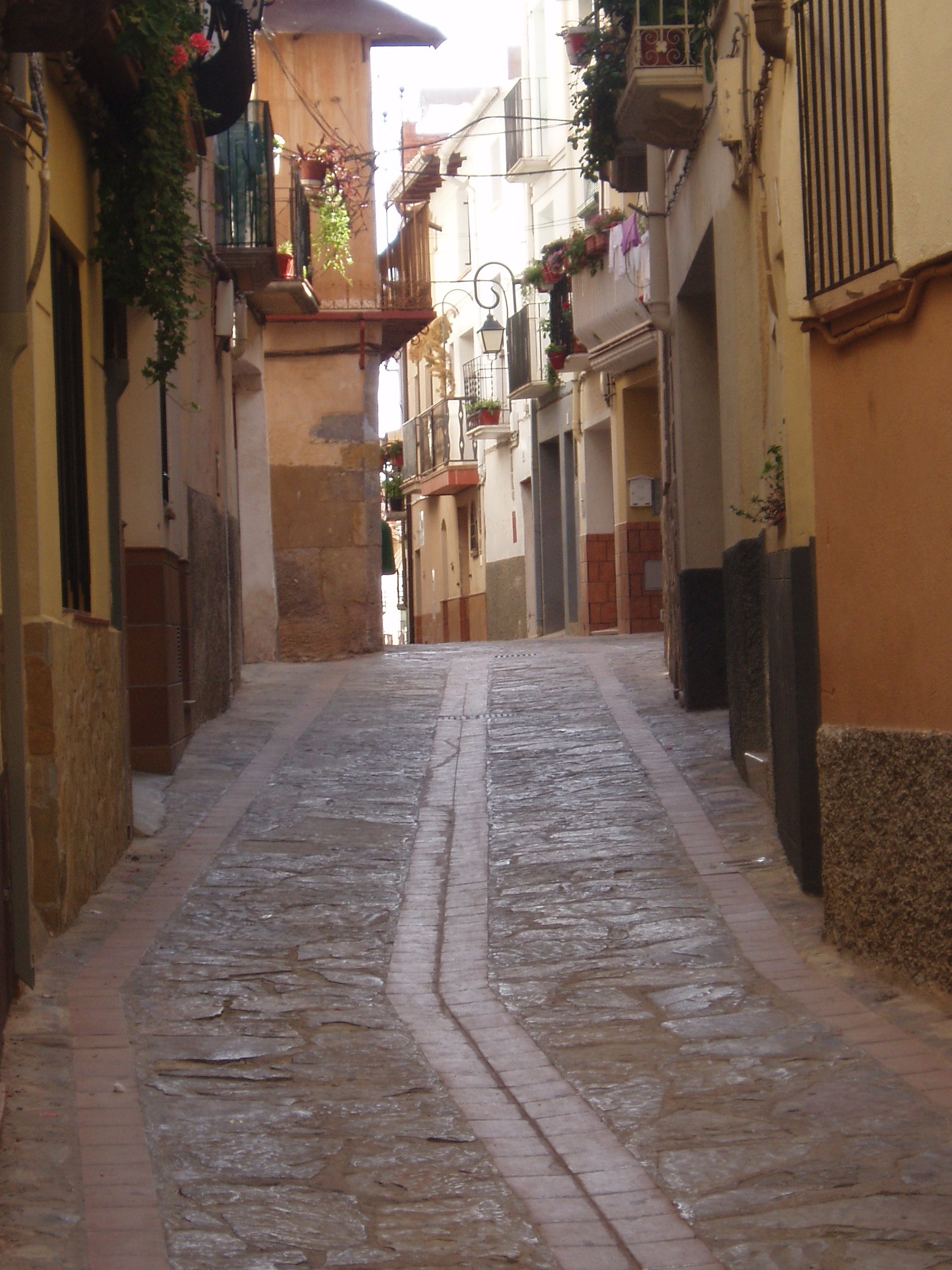 For more information on the cultural heritage of Alcorisa.