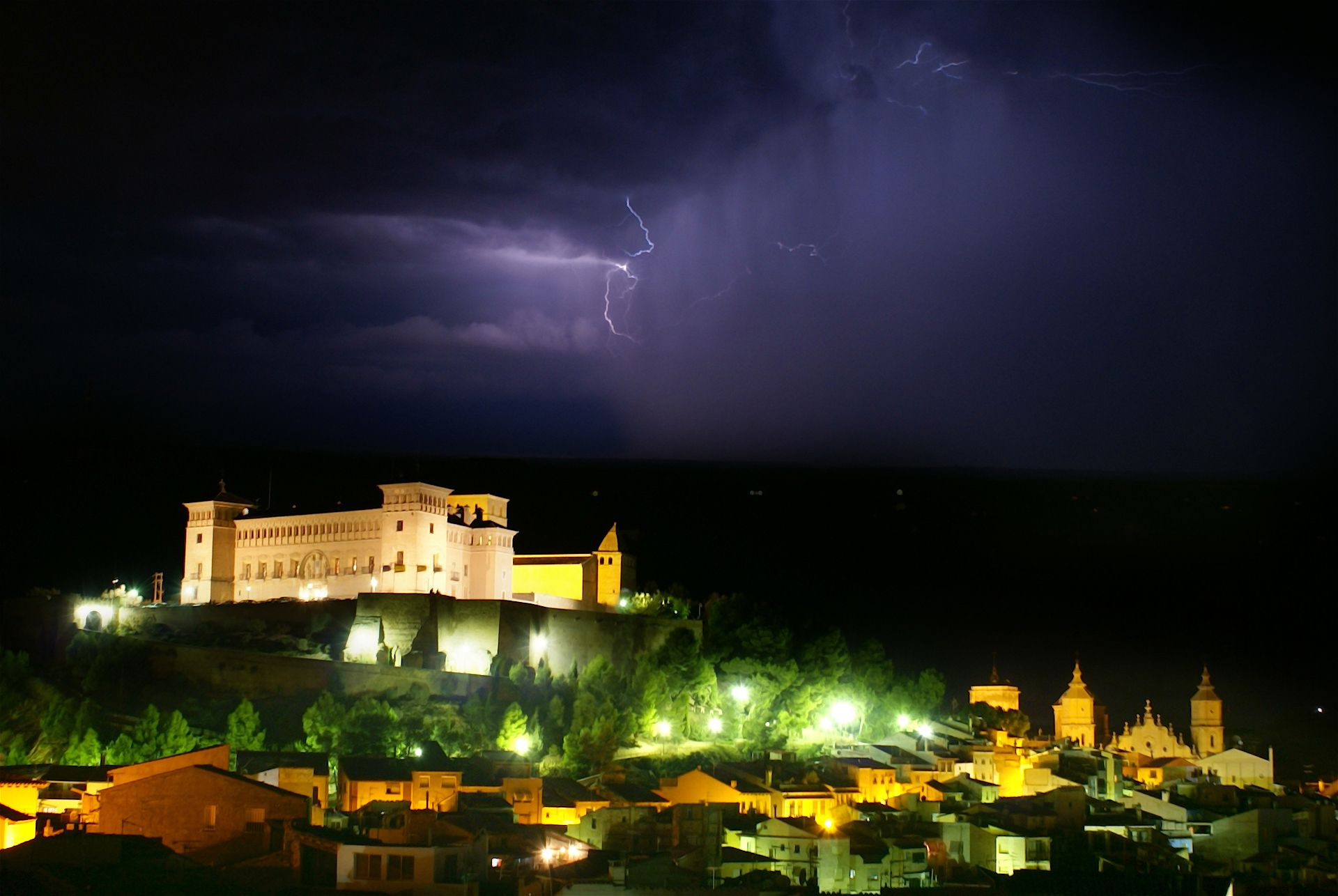 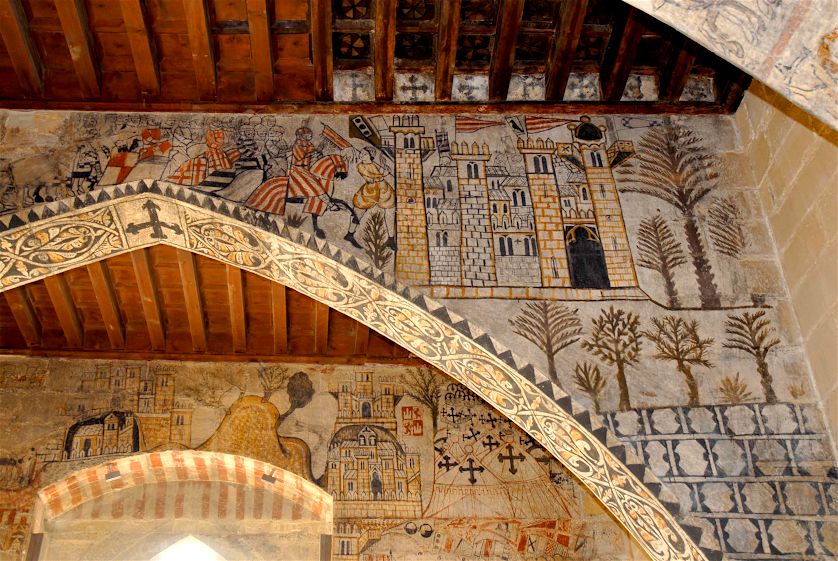 Welcome to Alcañiz, the capital of the Lower Aragon region. The city lies on a meander of the River Guadalope that “embraces” the hill of Pui-Pinos. Its name is Arabic in origin, and refers to a cañizo or cane, which forms part of its coat of arms. The city's name is also accompanied by the honorific titles of “Loyal”, “Most Loyal” and “Heroic” owing to the bravery shown by it during different conflicts. 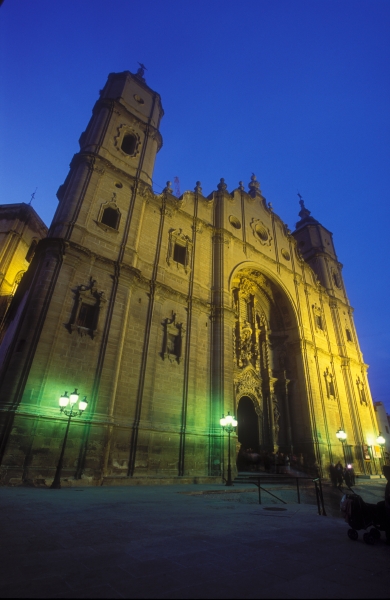 Many testaments to Alcañiz's past are still preserved and tell of its history and its past inhabitants. Evidence left by the first settlers is to be found in the cave paintings of Val del Charco del Agua Amarga, included on the UNESCO World Heritage list. The Iberian settlements discovered at the El Palao and El Taratrato archaeological sites, together with the Iberian Necropolis at El Cascarujo, all form a part of the Route of the Iberians, and there is a permanent exhibition related to them in the Old Flour Mill in Alcañiz, pending completion of the visitors' centre.

The city as it is known today was founded in the Middle Ages. After the reconquest of the region from the Moors by the Christians, Ramón Berenguer, Count of Barcelona and Prince of Aragon, granted Alcañiz its township status in 1157. In 1179 his son, King Alfonso II of Aragon, donated a large tract of land in the region to the Military Order of Calatrava.

Dating from this period are the Castle of the Knights of Calatrava, perched on the hill overlooking the city, the great bell tower of the church of Santa María la Mayor (14th c.) and the majestic 15th-century merchants' exchange. In addition, the medieval underground passageways, cellar and cold vault have been preserved and can can be visited, starting from the tourist formation office, and also the Old Flour Mill.

During the Renaissance, an important group of Humanists emerged in Alcañiz. This time also saw the construction of the magnificent town hall, built perpendicular to the Gothic merchants' exchange in the Plaza Mayor, and the church of Santo Domingo, now the ATRIVM Historical Space. A great many mansions were also built, such as Casa Maynar, seat of the regional administration, and Casa Ardid, which now houses the library and records office.

The Baroque style burst into Alcañiz and left a visible mark on the city in the form of many religious buildings. Outstanding among these is the church of Santa María la Mayor and the chapel of La Virgen de Pueyos, in addition to the churches of Carmen, San Francisco and Escolapios. This architectural style is visible in the southern section of the castle, the Commanders' Palace, today a luxury Parador hotel.

Industrialisation began on an extensive scale in the 18th century. With it came mills, furnaces and factories, among others, and the city was built up. The time of the Bourbon Restoration and the turn of the 20th century have left examples of the prosperity of those years: the beautiful Art Nouveau (Spanish Modernista) houses lining Paseo Andrade and Casa Taboada, the theatre, the market and the much-loved Fountain of the 72 Spouts in La Glorieta Park. In turn, the arrival of the railway in Alcañiz brought about industrial expansion across the other side of the river. 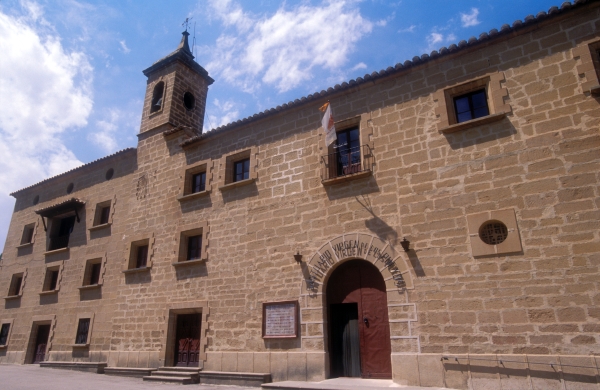 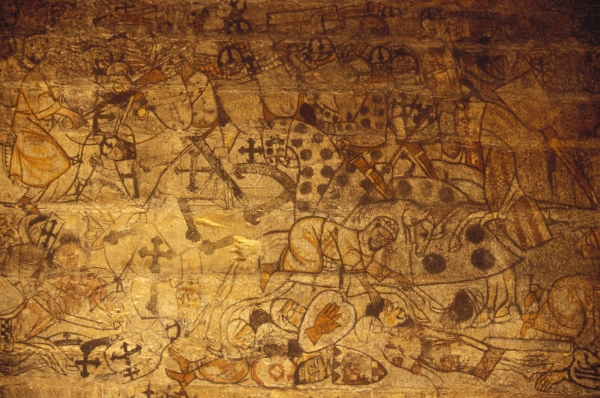 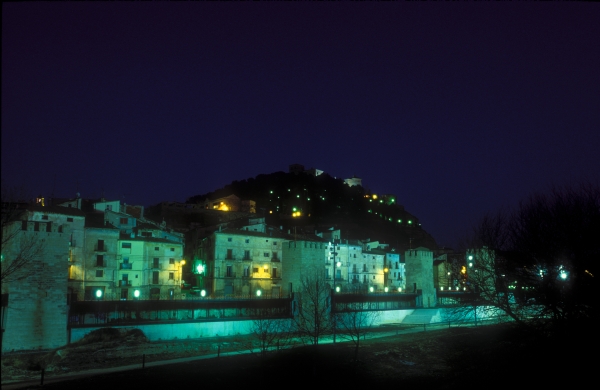 The 20th century saw the city grow, interrupted only by the Spanish Civil War. Development would peak in the 1950s with the construction of the purpose-built villages of Valmuel and Puigmoreno on the outskirts of the city. Alcañiz today is a living city in which the magnificence of its restored historic quarter coexists harmoniously with the modern city that has grown up around it.

It forms a part of the Drum Route, and the Holy Week celebrations in Alcañiz are a must-see, as are its medieval market and “The Defeat of the Dragon”, an event held on 23 April every year to commemorate the feast of Saint George, the patron saint of Aragon.

For more information on the cultural heritage of Alcañiz