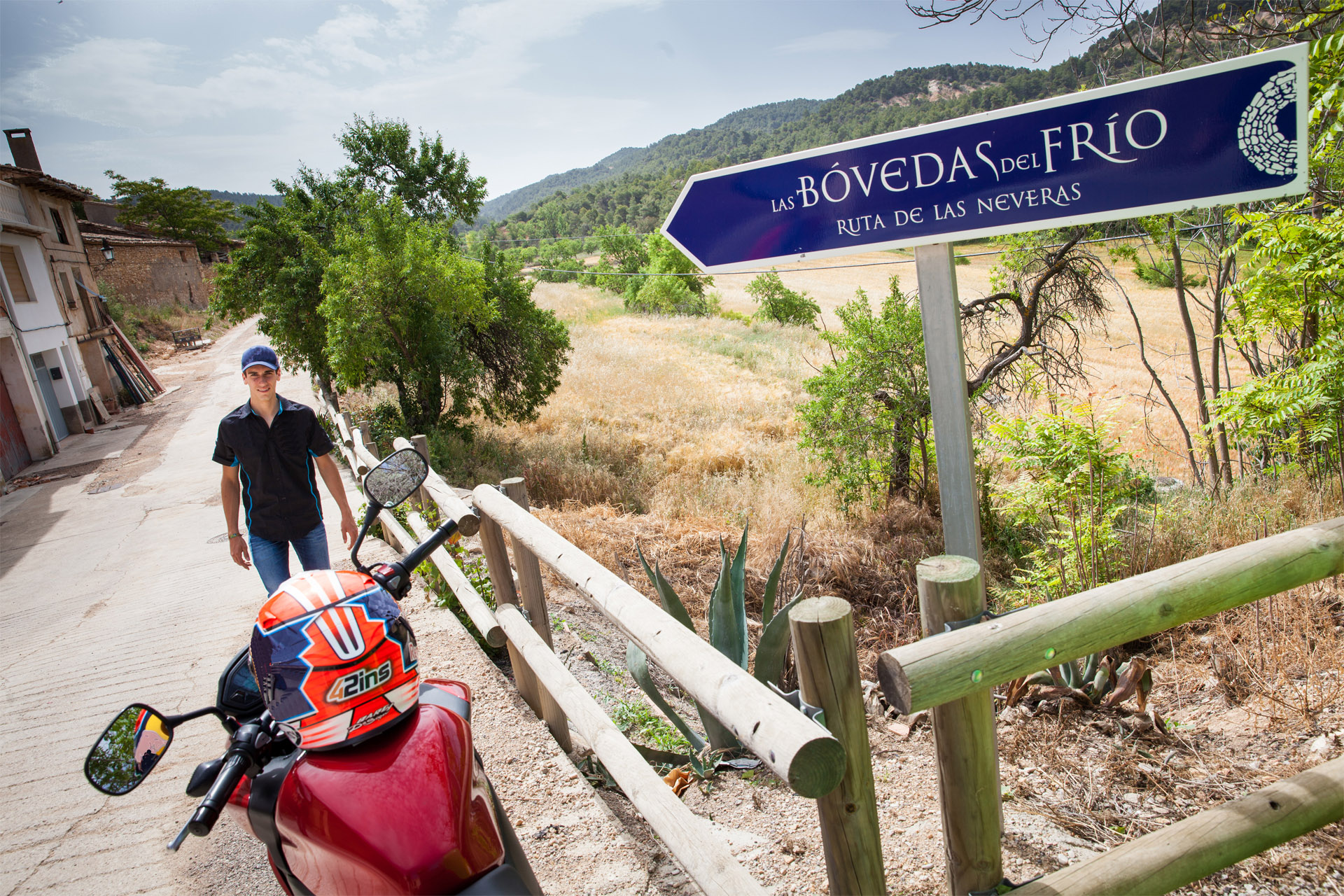 This themed route (approx. 127 km) was created as the result of the restoration of a series of ice houses and cold vaults built in the Lower Aragon region during the 16th and 17th centuries.

This is no doubt one of the star attractions for travellers in this region. The ice houses and cold vaults in these lands are unique owing to their size and special construction. The latest generation equipment used in their musealisation – including dramatic effects using lighting, music and evocative voice recordings – explain to visitors such aspects as the way to build a structure of this type, and the storage, transport and use given to snow.

Each of the ice houses and cold vaults deals with an aspect related to snow, cold and the past of this region. The collection of such structures comprises a route that is one of a kind in Europe.

SEE THE ROUTE ON GOOGLE MAPS

The route begins in Alcañiz and ends in La Mata de los Olmos, although it can also be taken in the opposite direction. It is 127 kilometres in length and takes in the ice houses and cold vaults in the following towns: Alcañiz-Valdealgorfa-Belmonte de San José-La Cañada de Verich-La Ginebrosa-La Mata de los Olmos y Calanda.

The route starts in the centre of Alcañiz, at an altitude of 339 m above sea level, beneath Plaza de España, where the first cold vault is found next to the underground passageways and accessed through the Tourist Information Office.

This space, a rectangular area measuring 80 m2, 4 m in height, was excavated into a large block of sandstone under the city and is one of the treasures of this route.
The musealisation experience consists of wall and ceiling illumination and an audiovisual projected against the stone vault. The audiovisual explains to visitors the system of selling and supplying the different ice houses and cold vaults in Alcañiz between the 17th and 18th centuries and quite recent times.

To continue the route to Valdealgorfa, take the N-232 direction Castellón, and turn onto the TE-710, a total distance of 14.5 km.

The cold vault found in Valdealgorfa is striking because of its floor, which features drainage channels carved into the stone. The lighting specially designed for this structure highlights those channels with cold light, while the stone masonry walls are bathed in blue light, creating the effect of cold that is in keeping with that found along the Route of the Ice Houses and Cold Vaults.

A dramatised recording explains the systems used to operate the cold vault in the 17th century and gives insight into its workings.

To visit these cold vaults:

The route leaves Valdealgorfa and continues on towards the ice house in Belmonte de San José. To reach this town, it passes through the Mezquín Valley, a land of olive groves with a varied offer of leisure, culture, sport and rural tourism activities that is strategically located in the heart of the Lower Aragon region: between the mountain passes of the Beceite National Reserve and the foothills marking the boundary of the Maestrazgo region. Take the A-1410 for 11 km until Torrecilla de Alcañiz, which is crossed before continuing in the direction of La Codoñera and Torrevelilla until your destination: BELMONTE DE SAN JOSÉ

This is one of the most beautiful towns in the Lower Aragon region. The layout of the town is reminiscent of Roman times, and among its streets are still the still-extant gates built into the 18th-century protective walls, such as the beautiful Soldevilla Gate, which features its original stonework.

The domed roof of the Belmonte ice house is a work of constructive art. Its stone arches are illuminated with a white light, which gives this ice house an appearance of elegance and distinction.

It is the only structure of its kind on the route that is entered through the upper part, via a staircase hugging the wall.

A dramatised recording with ambient sound effects and music soundtrack reveals the secret of the master builders who were responsible for the construction of these magnificent ice houses and cold vaults.

Leave Belmonte de San José and take the A-1409 along a 6.4-km stretch until you reach La Cañada de Verich.

The first thing to strike you about this cold vault is its amazing entrance, made through a tunnel cut into its base. The changing illumination enhances the beauty of the stone vault.

A recording describes the way the ice houses and cold vaults were leased out and some interesting related facts.

It would be a shame to leave La Cañada de Verich without visiting another of its treasures, the recently restored olive oil mill, which now houses a very interesting museum space that explains the process of making olive oil and the history of its production.

This town is also home to a communal ice house, which faces north-east and is located close to the town proper. It is circular in design and was built using masonry filled with mortar. It is entered from the side by means of stairs that give access to the lower part. It offers an exhibition describing the disuse and abandonment of the ice houses and cold vaults as a result of the introduction of refrigeration. A series of illustrations and posters from the period offer a glimpse into this part of Spanish history. The ice house was in operation until the 1930s.

To visit the ice house in LA GINEBROSA: Collect the keys at the swimming pool bar.

The route continues along the A-1409 for another 11.2 km until Aguaviva, then 5.3 km more until Mas de las Matas, where it turns onto the A-225 until Alcorisa. Cross the town and take the N-211 through Los Olmos until your destination: La Mata de los Olmos.

In this town of 266 inhabitants, the most distant from Alcañiz, we recommend a stroll through the well-kept streets to the square lined by the town hall with its characteristic space formerly occupied by the market (16th c.) and the church (17th c.) both built in quality stone. The magnificent, recently restored ice house gave rise to the Route of the Ice Houses and Cold Vaults.

Located at the highest point of the town, next to the threshing floors, this ice house is differentiated by its spectacular ashlar domed roof and five exterior openings made to allow it to be filled with and emptied of snow.

The ice house is accessed through the adjacent building that serves as an interpretive centre for the route. See File

The annexe is built on the former clearing space of the ice house, and it offers information on the location of other ice houses and cold vaults, a model of how the interior worked and an audiovisual presentation about how fish was trasnported inland from the coast using ice houses to restock the ice used to preserve the fish.

Lighting and ambient sound complete a pleasant and surprising visit to this ice house.

In order to continue the route, double back along the N-211, returning through Los Olmos and Alcorisa, as far as the turn off to Foz Calanda. From there, take the TE-V-8321 to Calanda, skirting the reservoir.

Calanda is home to a cold vault with two wings, added at a later date to the original, and used for an exhibition. See technical specifications

One of the spaces is used for the projection of an audiovisual explaining how the cold vault was filled and how it worked. In another of the lateral spaces there is a series of backlit panels explaining the different uses that could be given to the snow that was stored in the cold vault: food preparation, medicine, etc.
The main hall shows how the different layers of snow were arranged by means of a cross section.

A visit to Calanda is not complete without a look at the Centro Buñuel, a recreation of the surrealist world of the master cineast Luis Buñuel.