The Route of the Oases

The Route of the Oases is a journey (approx. 84 km) that is filled with contrasts and takes in some of the best bends in the region. You will discover how the oases that appear between the steppe and hills of the Lower Aragon region are actually the result of the architecture of water, engineering works carried out to regulate the rivers in an area severely affected by drought: These are also places for leisure where a large range of activities is possible, including watersports, hiking and horse riding, 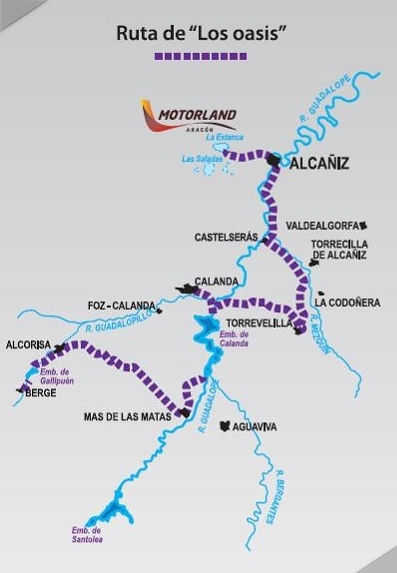 The route begins at the Estanca de Alcañiz, a small lake with waters that are kept at the same level by means of different works of hydraulic engineering. According to the environmental catalogue published by Fundación Quilez Llisteri:

"The Estanca de Alcañiz is one of the most idyllic landscapes in the Alcañiz area, and serves as a calling card for tourists arriving from Zaragoza (Saragossa), whose first sighting associates the lake with the image of the city of Alcañiz in the background. It originally formed part of a series of endorheic salt lakes, known as the Saladas (salt pans), which are found in the district. The Estanca is now a reservoir used to store water for use in irrigation, particularly for the new market gardens of Valmuel and Puigmoreno. This oasis-like landscape in the middle of the steppe is one of great scenic beauty and is a favourite with many of the residents of Alcañiz who enjoy the area for leisure and sporting activities, such as cycling, hiking, horse riding and sailing. The land surrounding the lake has been reforested mainly with pines, and angling has been and still is one of the lake's main attractions. The recent construction of the Motorland raceway in the vicinity has occasionally caused disturbance to the tranquillity of the landscape, but this has not led to fewer visitors to the area. Another feature of the Estanca is its great wealth and diversity of aquatic wildlife. Evidence of this is the creation of observation posts for watching the birds that inhabit this space. The Estanca de Alcañiz is part of a natural basin some 6 km in length, which receives water from the River Guadalope by means of a 25-km-long canal, and the reservoir holds 11 million cubic metres of water.

The journey towards Alcañiz takes the N-232 along a 5.8-km stretch. The capital of the Lower Aragon region is bathed by the waters of the River Guadalope and there are pleasant trails and walkways along its banks.

After a 9.5-km stretch in the direction of Castelserás on the A-1409, you will begin to notice the contrasts. Close to the banks of the Gualdalope you will observe changing vegetation, but as you move away, you will notice how the landscape becomes arid, with the predominance of earthy hues and the green of the olive trees.

Continue along the A-1409 for another 11.1 km to reach Torrevelilla. This town lies between the Guadalope and Mezquín valleys, and the scenery is mainly filled with fields of cereal crops and groves of olive and almond trees, which contrast strongly with the forest lining the banks of the River Mezquín, predominantly ash trees.

The next stage leads to Calanda, a distance of 14.8 km along the A-2406.
This town is where the Rivers Guadalope and Guadalopillo meet, and is another of those places where water contrasts greatly with the land.

“In addition to fulfilling their main purpose of storing water for later use, reservoirs are areas of great appeal for a large part of the population, who use them for recreation. The Calanda Reservoir fulfils this function, and is particularly popular for fishing. Along its shore, many people can be seen enjoying a leisurely day trying to land a few fish. The area surrounding this lake, which is divided by the different municipalities of Calanda, Foz Calanda and La Ginebrosa, is very pleasant, given its location between the Tolocha Mountains and the Rodaznar pine forest, which spreads its way to the Sierra de La Ginebrosa mountains. The landscape is one of great contrast between the water and the nearby forests. From the high ground there are spectacular views of the reservoir.” Fundación Quilez Llisterri.

The Calanda Reservoir was built on the River Guadalope, in a gorge that cuts into the limestone mountains dating from the Jurassic Period, in the vicinity of the town of Calanda. It is owned by the Spanish government, and it covers an area of 312 hectares and holds 54 hm3 of water. Its waters are used to back up the water supply used to irrigate the Lower Aragon region.

After skirting the Calanda Reservoir, the route leads on towards Mas de las Matas, along a 19.9-km stretch of the A-226. This town lies between the Ebro Valley and the foothills of the Iberian Mountain Range.
The town's “hydraulic architecture” includes a flour mill dating from the 18th century, public wash houses and an irrigation system built by the Moors in the late 8th century that crosses the town.

The final stages of the route lead towards Alcorisa, along a 14.8-km stretch of the A-225.
Alcorisa nestles in the foothills of the Iberian Mountain Range as it rises to form the highlands of the centre and south of the province of Teruel. Boxed in by a calcareous platform, the River Guadalopillo, a tributary of the Guadalope, carved a series of bowl-like depressions during the Tertiary Period. Gorges and depressions alternate, where rocks twisted under strong pressure and clays and marls take on vivid and varied colours. This stage runs through a gorge of sandstone and conglomerate.

The route ends in Berge. It takes the N-211 and TE-V-8215 roads to reach the town. This stage skirts the Gallipuén Reservoir, built in 1927 to regulate the flow of the River Guadalopillo. It has a surface area of 44 ha and holds 4 hm3, used for irrigation.

“The Gallipuén Reservoir is one of Berge's tourist attractions, not only because of its scenic beauty, but also owing to the possibilities it offers for tourism and leisure. There is a small recreational area close to the dam, and fishing is allowed in its waters, which is controlled in this fishing reserve. There are different trails that lead to good fishing spots. The contrast between this body of stored water (approximately 4 hm3), used for irrigation, nestling between ravines and canyons, with its shores cloaked in pine forests makes this a highly visited space.” Fundación Quílez Llisterri.

This route connects with the following  motorcycle routes: Route of Land and Art, Route of the Ice Houses and Cold Vaults, and is a part of Route 232.